A nasty evening of ignorance, disrespect, and mutual prejudice

A nasty evening of ignorance, disrespect, and mutual prejudice 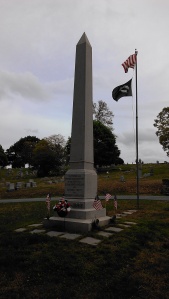 This week I cut the time for writing my Thursday blog too short. While on a business trip in which air travel once again went awry, I just got an hour of sleep before having to go back to work and there was just no time to type up anything. Bummed as I was about it along came Thursday evening and I got the following story as material to blog about. What happened at a local cemetery really made me think about ignorance, disrespect, and mutual prejudice. Let’s see what you think.

Memorial Day is coming about very soon and much like every other year, there are a few really neat traditions that come along with it. Fairview Cemetery in Coatesville PA is a very old grave site with many a graves dating back to the 19th century. It is the resting place of hundreds of people and there are countless veterans going back to the civil war. A few local Boy Scout troops are invited to change out the small USA flags that are placed on graves of any known soldier. They collect the old weather beaten flags and replace them with new ones that must hold up for another year until they get replaced too.

A little ceremony precedes the boys exchanging flags. There is miniature obelisk memorial honoring the civil war veterans who gave their lives for the freedom for so many people. A circular road surrounds this memorial all the way around. A neat group of civil war re-enactors participate in the ceremony. First the Boy Scouts lower the American flag to later raising it again while a bugler plays. Everybody salutes the flag and we say the Pledge of Allegiance. After this the civil war soldiers lay a wreath in front of the memorial. It is such a serene, purposeful, and dignifying experience to be there paying respect to the ones who often risked and lost everything such that we can enjoy a free and worry-free life.

Well, that is what would have normally happened. Not so during this Thursday’s event. Everybody was watching the boys raising the flag standing in the little road surrounding the memorial blocking any traffic for the duration of the ceremony. There was no traffic and it is worth mentioning that was not the only way getting in or out of the cemetery.

Along comes a mid 90’s 5 Series Beemer with two young folks in it. They wanted to cut through. That is where events became surreal. Below are four distinctively different themes that I invite you to ponder. The driver rolls down his window and at first politely asks for everyone to move. In turn he gets politely reminded that we are in the middle of a ceremony and to just hang on a few minutes until we are done, or to back up the little road going out of the other side of the exit.

He did not want to hear any of it and inched closer to the Boy Scouts, and the other adult attendees of the ceremony who were mostly either parents or the Boy
Scout leaders. We saluted the flag as it was being raised. He got belligerent and started yelling at people joined by his friend on the passenger side. The yelling got louder on either side of this altercation – by now we were attempting to say the Pledge of Allegiance. Are you kidding me?

Finally, he started backing up the road. Perhaps they finally relented because of the single-shooter rifles the civil war re-enactors were shouldering looked pretty intimidating. Making it just a few yards backing up he cranked up his stereo to the deep base of the latest rap music. The loud boom reverberated through the cemetery and I could barely hear myself think. He then proceeded driving across a marker on the lawn and brushed along a headstone with the side of his car. The cemetery grounds keeper called 911 trying to report the incident and making sure that the safety of the attendees could be assured.

The ceremony finished with the mood and the spirit of the moment significantly impacted with what had just unfolded in front of everybody. What in the world had just happened here? What is wrong with “people”?

For starters it was really ironic that these young men had no respect and not even a clue what this event stood for. Where they just uneducated or ignorant? They were extremely disrespectful for sure. We’ll never know, but it was more than ironic that the guys in the Beemer were the direct benefactors the celebration was about. We were honoring the people who helped secure the very freedom and the opportunities of pursuing the American Dream “these guys” are enjoying today. I am deliberately writing “these guys” because a few people used these words reflecting upon the fact that the young men in the Beemer were African American. I’ll come back to this detail in the next paragraph. What is wrong with “people”? 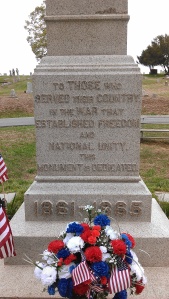 Once the Beemer was gone and they ceremony over the boys started swapping out the flags on the veteran’s graves. A woman started speaking to me about this incident and how afraid she had been about violence erupting from it. What she said then blew me away. She proceeded telling me about how the cemetery being located in a really bad part of town with known drug activity in the streets connecting to the graveyard.

She said: “You know that “they” were probably dealing drugs here, right? I saw their green Beemer come in here followed by a black Benz. “They” probably just finished and wanted to leave.” To which I said: “Do you mean the black Benz over there?” “Yea” she replied. “That is my car and I can assure you that I am not dealing drugs” I said.  There you have it; the very people who got offended in the first place now exhibited false judgment and outright prejudice – in a split second the victim turned into a perpetrator just like that. It really could have been anybody in the BMW – insert age or race etc. here and it would not have made any difference. Who are “they” and “these people”? This was just not right. We should not judge and speculate above and beyond what we can positively identify. What is wrong with “people”?

So wait a minute. What else did happen here with this little nugget? Driving a so called luxury car (in Germany Benz is more like a Chevy to people by the way) makes you a drug dealer just because you drive through a socioeconomically challenged town? Wow. What is wrong with “people”?

The next train of thought was geared towards the Boy Scouts. What did the boys learn on this interesting night? How did they perceive this issue and how will they later react and what will they do when they encounter something like this in the future? I am hoping that we handled the situation in a way that will encourage them to do the right thing. Showing respect and not being judgmental were hopefully two important take-aways for them.

It made me think why the ignorant folks in the green BMW were acting the way they did. Though old enough to know better, they appeared incapable telling right from wrong. Possibly their parents failed their duty to properly imparting good core values upon them. Does this not apply to all of us though too? Where may we be letting our children down? What is wrong with “people”?

The final interesting point of the night was the call to police. The cemetery custodian called 911 and reported the incident. So far so good. However, he was pretty much laughed at reporting an incident in the area we were in and with little to no information about the young people in the green BMW. He did not have the license plate number either. To no surprise the cops actually never made a point of showing up. What is this supposed to mean? What is wrong with “people”?

My friends, the only difference we can make is with ourselves. Please help making sure that we teach our kids some great core values. May they be one day capable of not being judgmental, having and showing respect for people, creatures, and our environment. Let them grow up with good and long term sustainable ideals. Let them continue on their paths of finding themselves and also having a lot of fun along the way. Please act responsibly and respectful of others. You never, ever know whom you impact by what you say or do.

What is wrong with “people”? Well, these people are us – you and me. Prejudice lurks at every corner and a victim can turn into a perpetrator the next second; this story told the tale of that. The silver lining here on Thursday night was that all Scouts and the dignitaries were on their best behavior and they did exactly what they had come to do. Actually, walking across the huge grave yard and changing out the many, many flags may have helped clear the minds and reduce the stress everyone was feeling. That is at least what the walk did for me.

I am hopeful that one day the two young men you have got to thank for this long post will one day get back on a better path. I would like to think that perhaps one day they are getting disrespected by even more ignorant people. Things tend to change really quickly when the roles are reversed – you learn very quickly this way.

I am also hoping that next year we will not have to go through another experience like this and once again can enjoy the meaning and purpose of this event in a respectful and dignifying manner. I do not want having to ask “what is wrong with people” again. What kind of questions or thoughts did this story raise in you? Would love hearing from you.

PS: Here is a bonus video about severely injured veterans enjoying a great race. Unbelievable odds had to be overcome for this. Semper Fi

4 thoughts on “A nasty evening of ignorance, disrespect, and mutual prejudice”