How to deal with difficult people 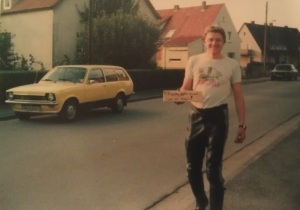 There are probably a few folks that totally get under your skin. They believe in things that you could never subscribe to and they are vocal and obnoxious about it. They may have even totally treated you unfairly. You would love to argue your point and arguments with them and yet it is like you are speaking with a rock. They will not listen – ever.

A while ago back in Germany we had a neighbor who had a problem a good friend of mine who used to rent a room from my parents. This friend had a habit to park his car on the side of the street of the neighbor’s property. One day the neighbor summoned my friend Werner to come speak with him and proclaimed a no parking zone front of his house: “The water and melting snow cannot flow around your tires and the water keeps creating big puddles”. Say what?

This guy’s argument was neither logical nor did he have the right or power to declare such nonsense. Bottom line was that Werner did not move his car. One day it snowed hard and when he emerged from his apartment to get into his car he found it blocked in by two huge piles of snow. One had been stacked up behind and the other in front of the car. The neighbor had had his revenge, or so it seemed.

He did not know whom he had messed with. Werner never got mad, he got even. His car was one with built-in hydrostatic suspension. He put it on high and flattened the snow mounds in little time. He lowered it as he plowed into the snow until there were no more snow mounds left. Ha! The picture above shows Werner with his “present” for the neighbor. He wrote a heartfelt greeting on it. The material (soft pinewood) had something to do with what he thought the neighbor’s head was made of.

All humorous anecdotes aside, there is a six-step process that has a good chance of working when you encounter really unfair treatment as well as head strong and opinionated folks.

Challenging people and siturations are a daily fact of life. Do not take that in silence. Make sure that you are heard, but then move on. Do not dwell on it. It will not help you, nor will it really do anything with the one whose mind is closed for the day. Do you have a story to tell with ignorant folks? Would love if you shared it with us. Use the comment field below.