Archive for the category “self-confidence”

7 ways of overcoming your fear of public speaking

7 ways of overcoming your fear of public speaking 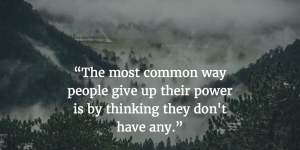 You are not alone in your fear of public speaking. While some folks appear to be blessed with a knack for naturally speaking well, you can do this too. All it takes is making a plan using a few of the above prepping strategies and you can excel at this as well. 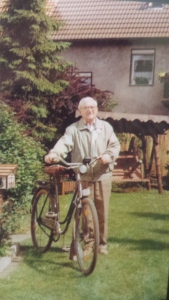 Take a moment and ponder this question. Past or present, who has had the most influence in your life? Who are the people that come to your mind?

For me this one person is grandpa Herrmann pictured right next to the final result of the most severe accident I have been in. Opa Herrmann did things in his life despite vast amounts of adversity he kept facing. Thinking of him keeps me inspired on so many levels.

He was born in 1909 and his family went through the first rough times during and after WWI. Then the depression era occurred and once again they were barely making ends meet. The Nazis took power and he took the unpopular route belonging to the liberal SPD party and thus never joining the NSDAP party. That was a very gutsy and highly unpopular position to take. Just before WWII he married the love of his life and two children were born during the war. He was part of a forward moving maintenance unit for a fighting group right behind Russian enemy lines.

His wife died from child birth complications not too long after my mom was born. The family could not care for both and they are divided and live with different relatives. His first wife’s sister could not stand that they are separated and abandons her own marriage caring for both children at Opa’s homestead – he was far away from all of this at the front.

The war is turning for the worse. He barely made it out of Stalingrad before it closes in on German Landser soldiers. The war ends and he was still in Russia when him and a few of his unit buddies threw their weapons into the ditch. They walked back West home bound. They hiked during the dark and somehow make it across the then Eastern border of Germany. Somewhere in Buttelstedt Germany an American officer most likely saved his life by writing him a passage letter allowing him to hike back home. He finally made it home after weeks worthwhile of hiking.

He eventually took a chance on a factory job where he successfully worked for over three decades. He stayed active in the local community and became a volunteer in the local volunteer fire company. He loved helping others and most of all he was fair – very fair. He had no favorites amongst all of his kids and the grand kids. We always go the same treatment and also money. He did this with a passion that I have never seen anywhere else. He always had an open ear and time for people and loved listening to their stories.

He was a great mentor providing many opportunities for us to learn hard lessons in a safe environment. He would let you fail, but was always there to also save you when things started getting out of hand. He would not sugar coat the truth, but he would also not push his own agenda. I surely miss him and his razor sharp wit and sense of humor. His zest for life and unrelenting drive challenging the people around him to live up to their full potential has been truly inspiring.

I am sure that it is easy to see why Opa had such a big impact on my life. How about you? Who inspires you the most? Is this person still alive today? If so, please make sure that you tell this person how much he/ she means to you.

Life’s challenges are the pathway to greatness

Life’s challenges are the pathway to greatness 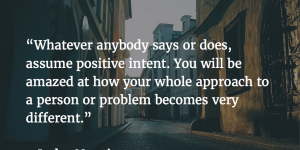 Last night I attended the graduation of close to 40 youth from the City of Coatesville area who participated in the work outplacement program by the Coatesville Youth Initiative. It was amazing to see so many young people apply for this summer job and rising to so many challenges. It was humbling to see how much they grew throughout their 8-week journey ranging from helping with community service projects to carrying out their at times rigid work routine. Most of all I will remember their smiles – they mustered their challenges and they did it with a smile.

Their happiness was so contagious and that made me wonder about the really happy adult folks. Do you catch yourself envying perpetually happy and content folks? They seem to have it totally together no matter what happens to them. They are engaged, motivated, and optimistic even under the most difficult conditions. How can this be?

Success like this leaves traces and all you have to do is following it. Make the investment and take a look the list below and also study people who already seem to have earned their black belt in unwarranted optimism.

Make the effort looking into the mirror every day and making the commitment to really liking what you see when you stare at yourself. Be amazed how much this practice can change your outlook in life. Then fire off one or more of the dozen tips from above and see what happens.

How to avoid letting other people get to you

How to avoid letting other people get to you 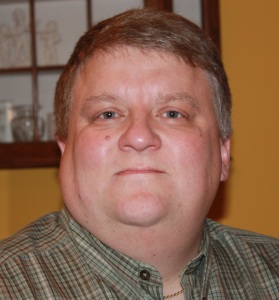 The premise of this is really simple: If you get to wrapped up in what others think of you and how they react to what you write about, how you decide something, what you look like, etc, you may lose what you are really all about. Another nasty fall out may be that this kind of thinking pattern makes you feel anxious – really anxious.

For a decent portion of my adolescence I had fallen victim to it myself. In the end I made decisions and voiced my intentions based on what I felt would offend the least amount of people. What a dangerous slippery road this was. It set the stage for future misconceptions and expected behaviors.

Does that sound like you? Do not feel bad; this will happen to just about any of us at one point in time or another. Bottom line is what other people think of you is none of your business. Ask yourself a very simple question when you feel anxious: When you have made a decision and you voice your opinion candidly, will your groceries, gas at the local sources costing you any different amount compared to the people that you are worried about? It may sound silly to you, but this kind of mental framing has helped a few people to feel a lot better about themselves.

On the path to the true YOU and a genuine self your first step is to not worry about what other people think or expect of you. Brutal honesty with yourself and scanning for what you really want or do not want is the next step. If you have managed to get to the very inner core belief and connect your desires, talents and visions with it, you will emerge with a clear picture what the future will look like. Once you can picture it and you voice your intentions, you will automatically find allies that will stand by your side and help you. Listen to these folks – whatever the other folks think is no business of yours.

My call to action is for you to think about a situation where you were too much concerned about how other people were thinking about you. If you had to do this again, how would you do this differently now? Please share your experience in the comment section.